At this moment in my journey as a graphics artist I choose a classical letterpress technique such as the technique of linocut. I am consistent in this choice, refusing to acquiesce to the pressure of a chase for innovation at any price. I am not into fashions because my time matters to me and I choose what is authentic and important for my microcosm, what I want to say in my works, to uncover for myself, which means and tools will help me, because this is my intimate expressione. This endows me with the sense of freedom, fulfilment, and being just to my own time and life. In a review to another cycle of my graphic works, titled Psalms, Professor Stanisław Rodziański put such words: “From the earliest days of her artistic life - Małgorzata Chomicz says – she has felt that both the visual and spiritual matter of a picture are equally important. This is where we touch on a problem which is significant in the past and current works created by Małgorzata Chomicz. I believe that this artist, as soon as she graduated from the School of Arts, discovered the essence of the graphic art workshop and made an effort to define the meaning of her works and their message (...). The quest she has undertaken in terms of both techniques and craftsmanship, so fundamental for graphic art, are closely connected with the raised problems and the internal ‘content’ of her works of art. At this point, it is worth recalling the words once uttered by Witold Lutosławski: ‘... the principal matter in music is not ‘how’ but ‘what’. This ‘how’ is necessary – said Lutosławski – but the message is most important. And it is the message that we are waiting for.” Now, the review from which I borrowed the above passage concerned the works of art I created over 15 years ago, and it was written in 2005, but it remains true about my work.
Let me repeat after a Buddhist monk, Ajahn Brahm: ‘Peacefulness is the highest level of hapinness.’ 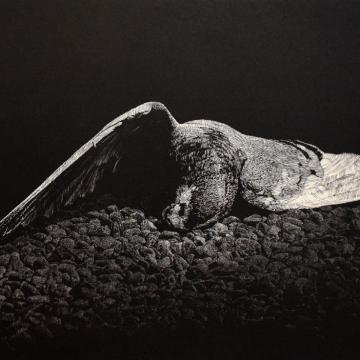 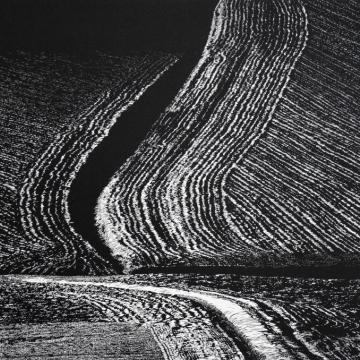 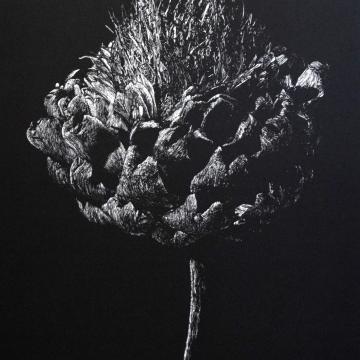 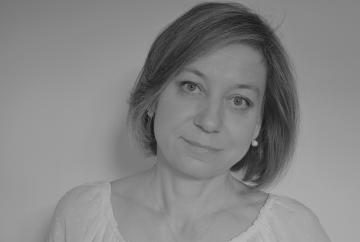 In 1995 she graduated from the Academy of Fine Arts in Poznań, gaining a diploma with a distinction. In 1996/97 she served academic internship at the Academy of Fine Arts in Krakow, Poland, at the graphic arts department.
Since 1992 she has been working at the Pedagogical Institute in Olsztyn. She has been teaching the techniques of printmaking for 20 years. She has been an associate professor at the University of Warmia and Mazury in Olsztyn (the UWM) Poland since 2007, dealing with printmaking and book arts.
She has showcased over 65 individual exhibitions. The artist considers her individual exhibition in the ancient walls of the Palace of Diocletian in Split in July 2015 (the building placed on the UNESCO list of world heritage sights) her most important art presentation. She took part in over 300 collective exhibitions.
Małgorzata was a scholarship holder of the John Paul II Foundation of Polish Christian Culture Institute in Rome in 2000 and 2002, and in 2001 of Fonds d'Aide Aux Lettres Polonaises Independantes in Paris (scholarship in Rome and Florence). In 2004 and 2017 she took part in the International Art Camp - Barcs (Hungary), and in 2015 she was invited to participate in the international symposium „Slovenia Open to Art - Sinij Vrh". She was the winner of Biennale of Plastic Arts in Olsztyn in 1998, 2001, 2005, 2017.
In 2006, 2007 and 2011 she was awarded in the International „Premio Internazionale di Grafica del Pomero" competition - RHO - Milano (Italy). She was also awarded a prize by the Mayor of Olsztyn in the field of culture in 2009.
In 2012 she received 1st award at The Internazional Biennal of Contemporary Graphic Art - Perugia, Italy. She was awarded "The Best among The Best" prize for her achievements in the field of culture, founded by the Warmia-Masurian local authorities in 2013. In 2013, she also received a distinction at the 12th Bienal Internacional de Grabada "Josep de Ribera" XÀTIVA 2013 (Valencia) Spain. In 2014, she recieved the distinction at Excellent Mini-prints once again - Guangzhou International Exlibris and Mini-prints Biennial (China). Furthermore, the distinction at 2nd Garzapapel Engraving Contest "Works Reception" - Alcoy (Spain). In 2015 she was nominated for the 12th Gran Prix of the International Biennial of Engraving "Premio Acqui" (Italy). The same year, she received the "Silver Laurel" of the well-deserved for the University of Warmia and Mazury in Olsztyn (Poland). In 2016 she was the winner of the Grand Prix "PREMIO ASSOLUTO" at The First Internazional Biennal of Contemporary Art - Perugia, Italy.
In 2016 Małgorzata Chomicz was awarded the Decoration of Honour "Meritorious for Polish Culture" by the Ministry of Culture and National Heritage. 2017 - Distinction - 3 ° Concorso di Xilography "Ugo Maffi Città di Lodi" - Spazio Bipielle Arte - Lodi (Italy). In 2018 she received 1st award at The International Engraving Award "THE SAINTS OF DISO" (Italy) and "First Prize Author's Wishes Italian Graphic Art 2017/2018, Vigonza (Italy). She also received a distinction at the 8th International Biennial of Small Graphics in Tetovo (Macedonia) and Honorary Prize at 9° International Triennial of graphic art Bitola (Macedonia) in 2018. In 2019 she received 1st award at Triennale européenne de l’estampe contemporaine, Tuluz, (France).
She is a member of The National Italian Association of Contemporary Printmakers. In 2018 she was selected by Giorgio Marini (Vice Director of Drawing & Prints Department at Galleria Degli Uffizi in Florence, and currently the curator for Special Projects at the Central Institute of Graphic Design in Rome) to a group of 12 printmaker artists representing Italian prints for exhibitions in Ireland.
She is the promoter and curator of international projects including "An inconceivable case" - the interpretation of W. Szymborska's poem in graphics - an interdisciplinary project between: UWM in Olsztyn (Poland), RUFA Academy of Fine Arts in Rome (Italy), the Academy of Fine Arts of Zagreb (Croatia), the Academy of Fine Arts in Split (Croatia), the Academy of Fine Arts in Belgrade (Serbia), and the University of Ljubljana (Slovenia).

She has been invited to participate in many international projects. In 2018 she was invited to participate in the International Graphic Arts Festival IGAF in the Indira Kala Sangeet University Khairagarh (India). In 2019 she was invited as a visiting professor at the Indira Kala Sangeet University Khairagarh (India).
Her works are displayed in the collections at: The Museum of Ancient Glass in Zadar, (Croatia),the Foundation KulturDialog Armenien in Jerewan, (Armenien). Casa de Cultura Xàtiva, Valencia, (Spain), Il Museo dell'Incisione - Graphic Design Museum - Aqui Terme (Italy), the Polish Embassy in Zagreb (Croazia), Museum of Guido Calori San Gemini (Italy), the Gallery of Contemporary Sacred Art "Dom Praczki" in Kielce, the Museum of Warmia and Mazury in Olsztyn, the Library of Alexandria in Egypt, the Graver Maintenant - Dreux in France, the Guangzhou Academy of Fine Arts, (China), the University of Warmia and Mazury in Olsztyn and in private collections (China, USA, Germany, Italy, Poland, Canada, Slovenia, Hungary, Switzerland, ). She lives in Perugia (Italy). Dissertation titled ‘Malgorzata Chomicz as a printmaker’ was written in 2018 (author: Anirban Midya) at the IKSV University (India).