This photopolymer etching was printed in Jaco's makeshift studio in The Hague. It depicts a boy observing a giant tropical fish swimming or flying by outside a circular window. The window is flanked by world maps and lush plants. He is accompanied by an owl and a family of cats. As in most works, Jaco combined digital and traditional techniques to produce an image which is both playful and sinister, nostalgic and magical. 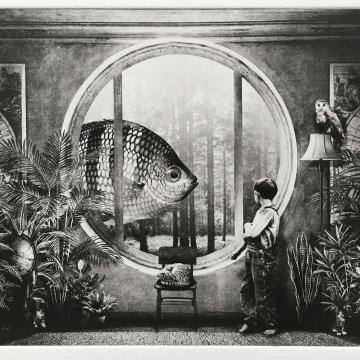 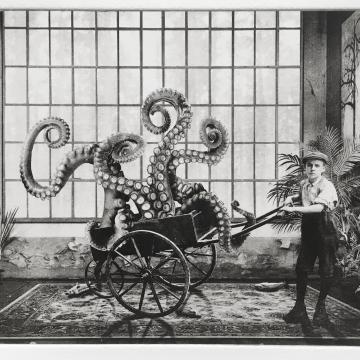 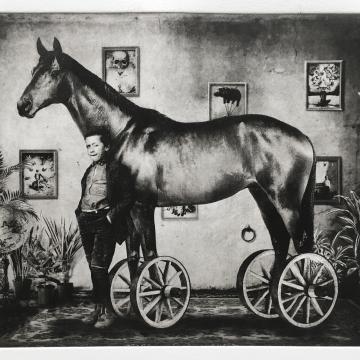 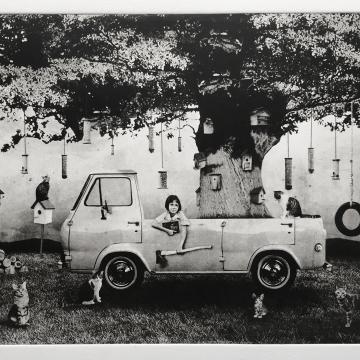 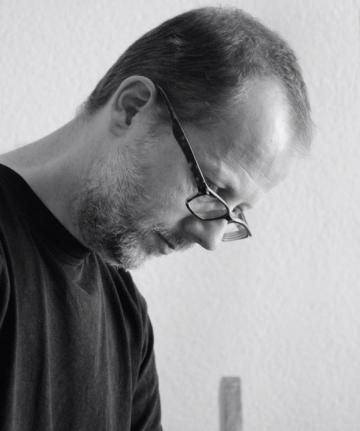 Jaco Putker is a contemporary artist and printmaker from The Hague, The Netherlands. He combines digital and traditional techniques to produce images which are both playful and sinister, nostalgic and magical.

His preferred medium is photopolymer, or solar plate, etching. This technique is a non-toxic way of etching which allow for photorealistic depictions.

Rather than impose a meaning to his work, Jaco Putker invites the viewers to associate freely and give his etchings personal significance through individual perceptions and filters.
The titles of the etchings are descriptive and give no handle as to the meaning of the works. The artist considers his works to be illustrations to fables which don't exist, but hopefully take shape in the beholders' minds.

Jaco Putker was awarded with the dutch national Business Art Service competition for Graphic Arts in 2010.
During the Awagami International Miniature Print Exhibition in 2015, he won the Awagami Paper Factory Prize.
In 2017 he won the ON PAPER International Printmaking Award 2017.
His work has been exhibited in Holland, Belgium, Germany, Norway, Northern Ireland, Japan, Taiwan, China, Australia, Canada and the USA.